Nant Gwrtheyrn, venue to round 1 of the 2017 HSBC UK National Downhill Series.

She’s a beast. A beautiful one – but a beast.

The venue is tucked away on the left shoulder of Wales and deep into some of the UK’s most beautiful, rugged countryside. The track drops through steep, rocky woods and down onto the cliffs above the Irish sea. Most people would head there for a walk on the sand, a bit of bara brith and a cuppa rather than to get brutalised in the steep woods.  It was discovered by Simply Downhill in 2010 who built the track and got it ready for the British Downhill Series in 2011 – won by Marc Beaumont.

The track was about as far from the peace and quiet of the beach as you can get. It was steep, muddy, rocky, slippy and nasty. It was a proper challenge for the UK’s fastest racers and a sharp wake up after a winter away from racing. 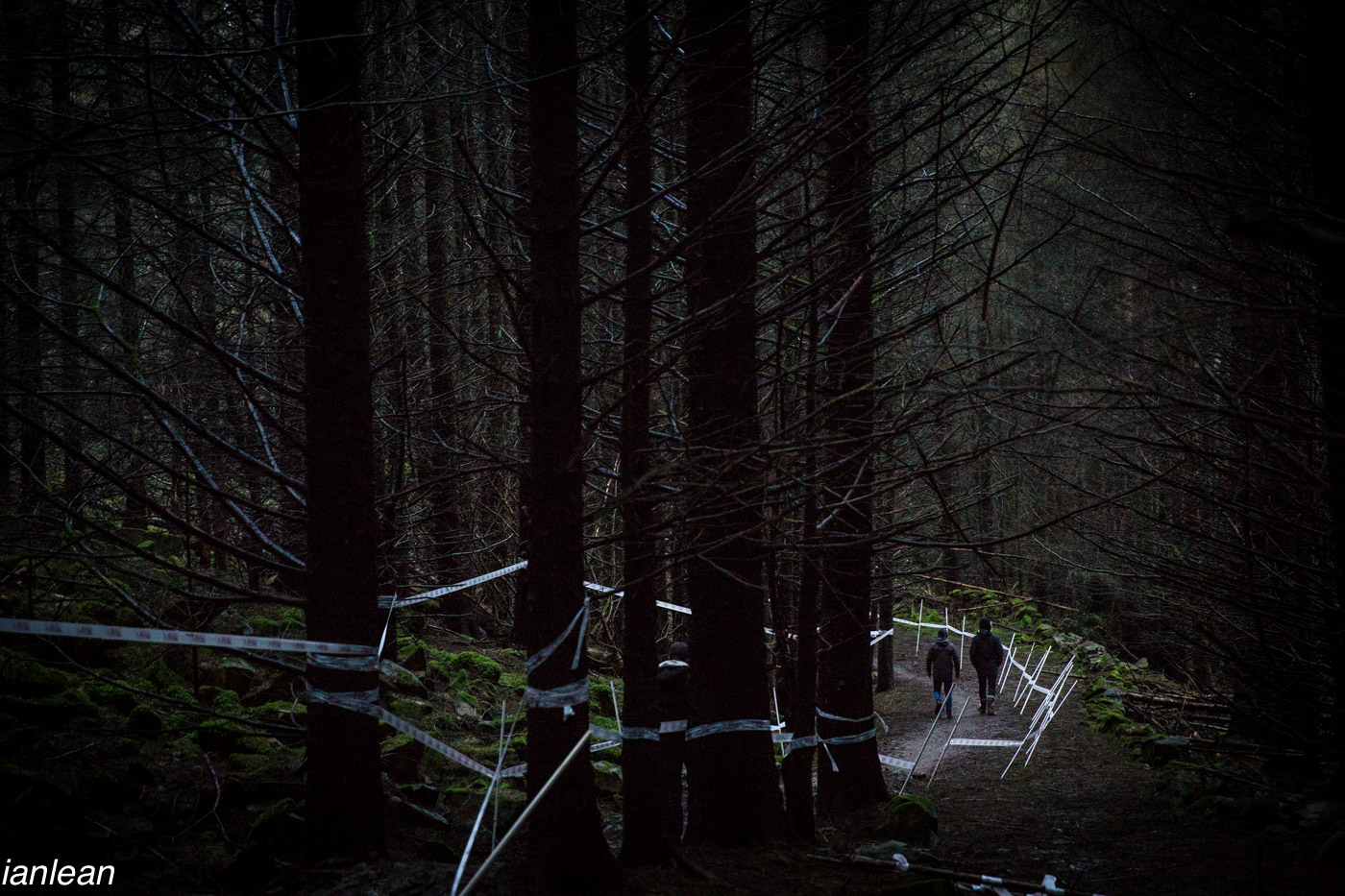 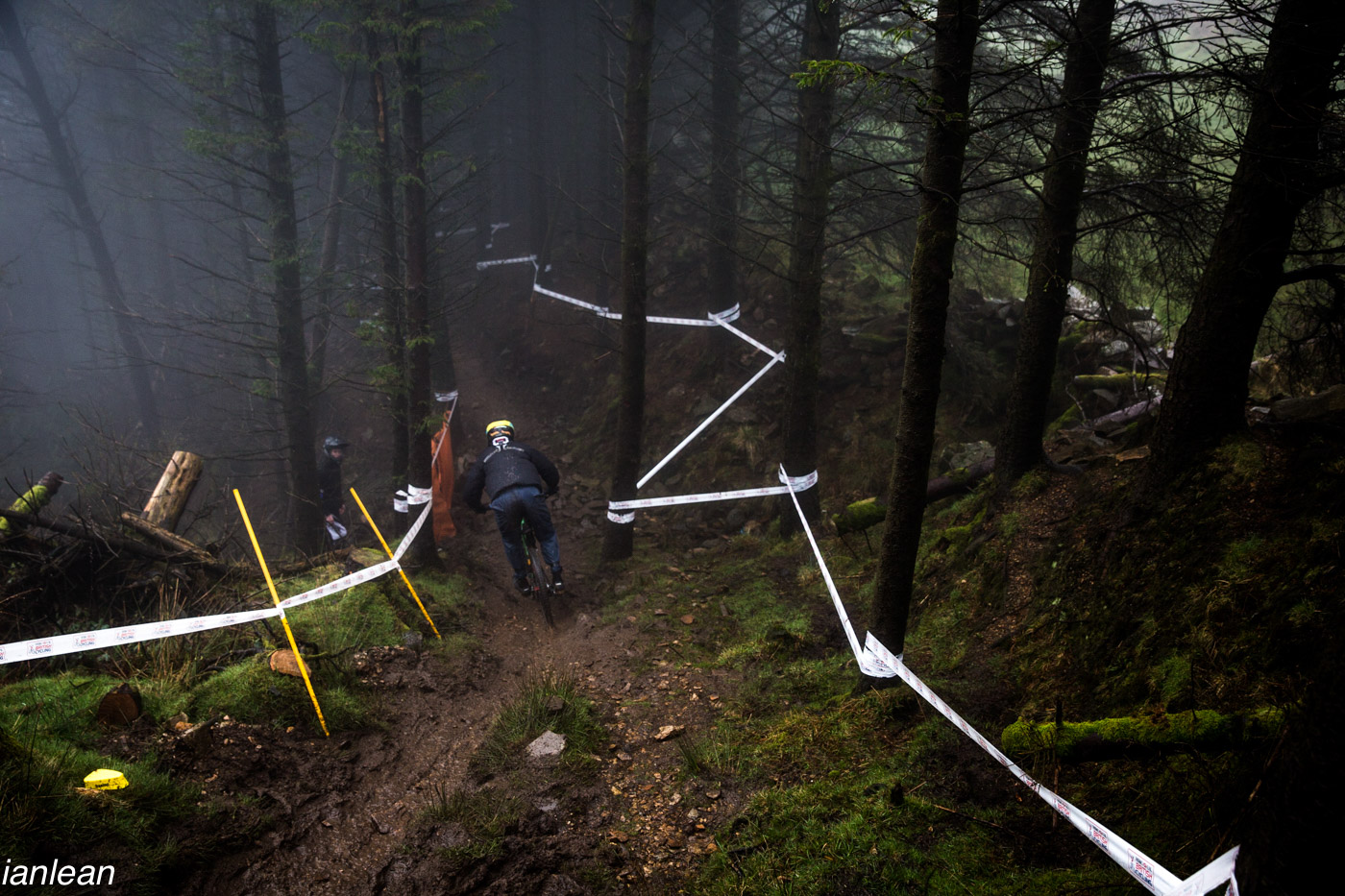 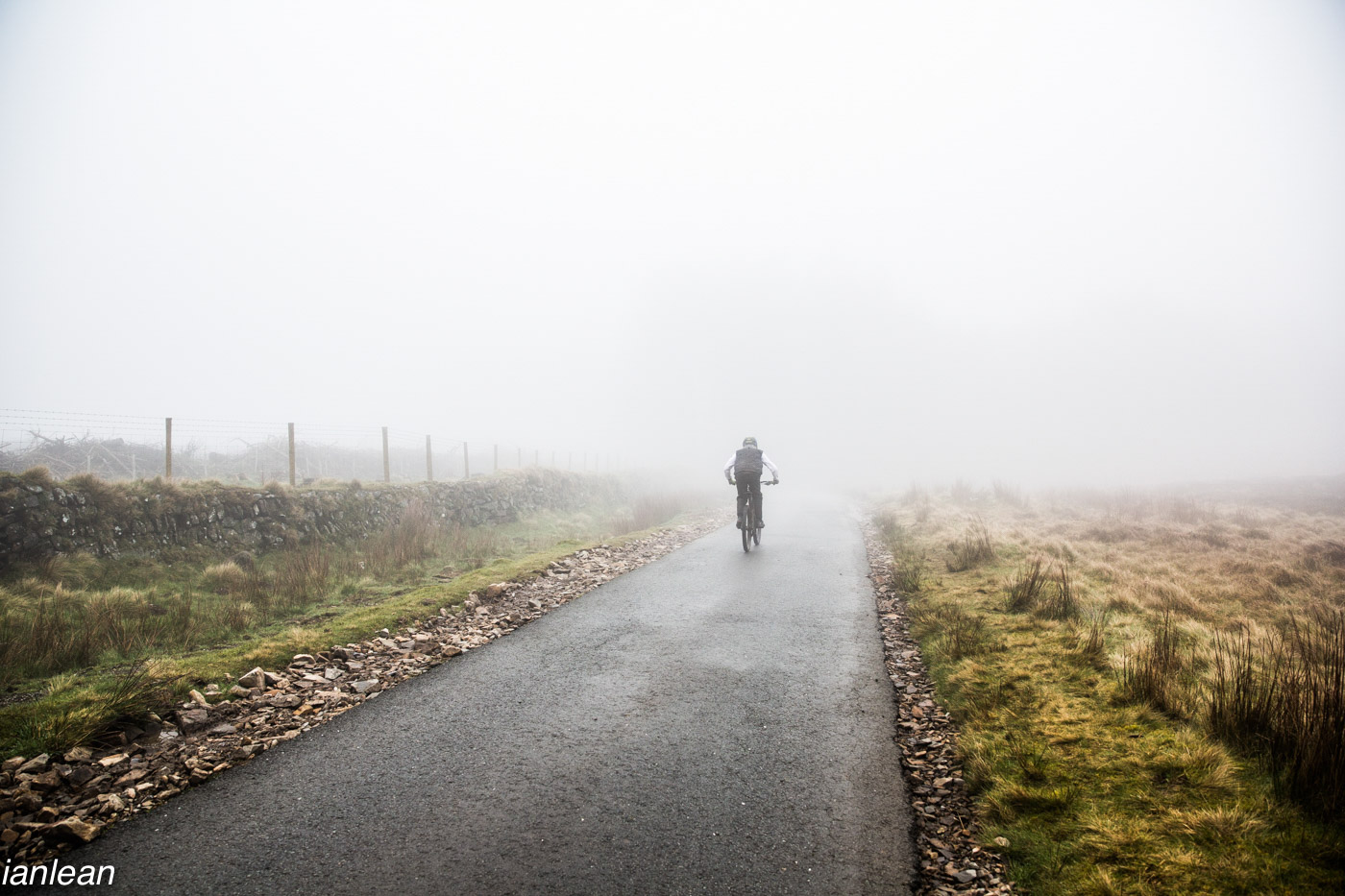 Rolling into the venue on Friday night we were expecting sunshine, beautiful views and a beer or two on the beach. What we got was lashing rain and deep mist. Conditions didn’t let up through Saturday and the already technical track turned wild.

The track was a game of two halves. Out of the gate it was tight, steep, loose and technical. Lots of roots and lots of rocks. Mike Jones told us “You’ve just got to remember that you can’t make up much time up top, but you can lose loads. You’ve got to be steady and save it for the bottom section”. 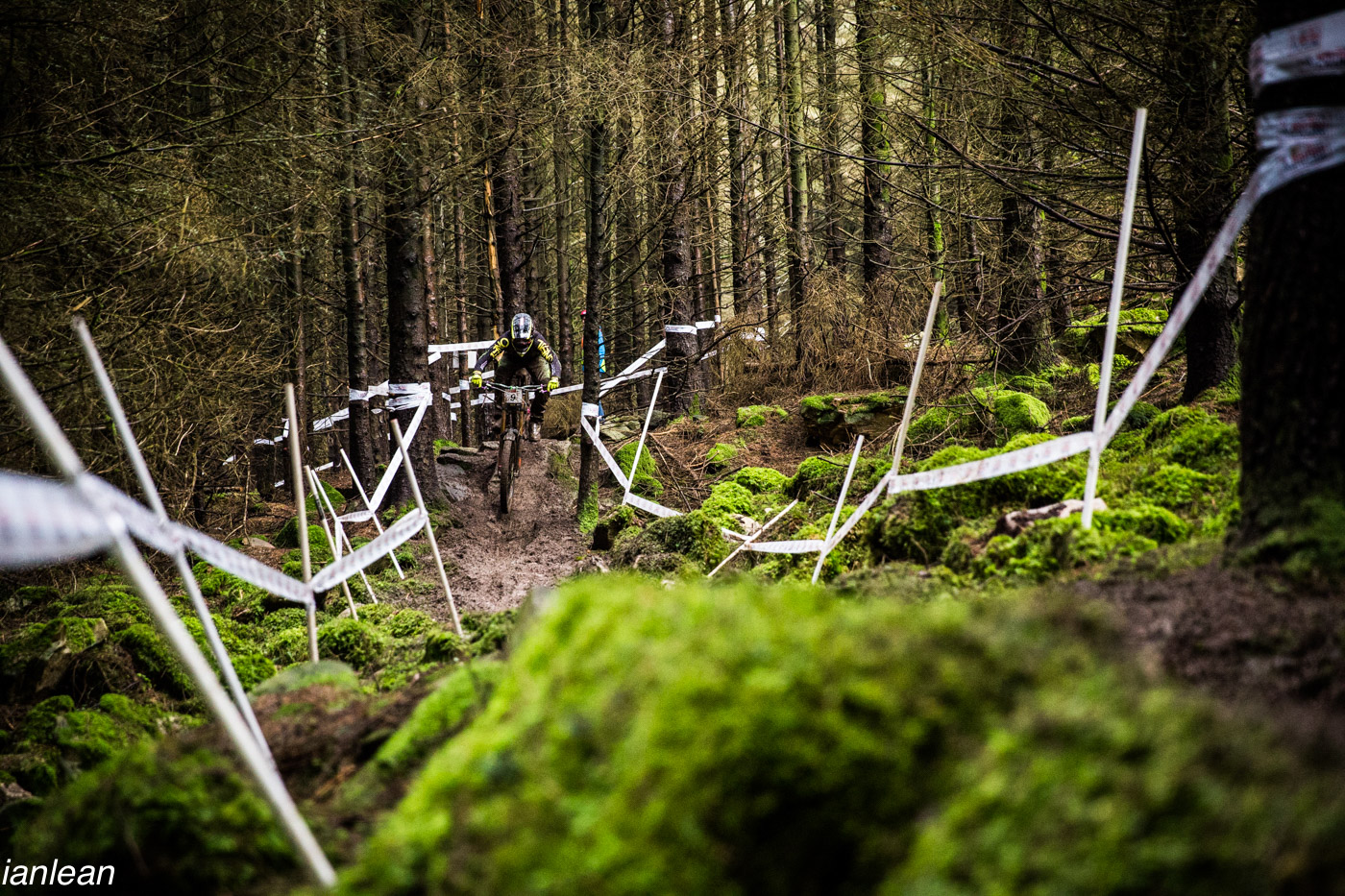 The bottom of the track was a totally different game. An uphill slog then a flat, pedally motorway showed who had been training and who had been slacking over the winter. 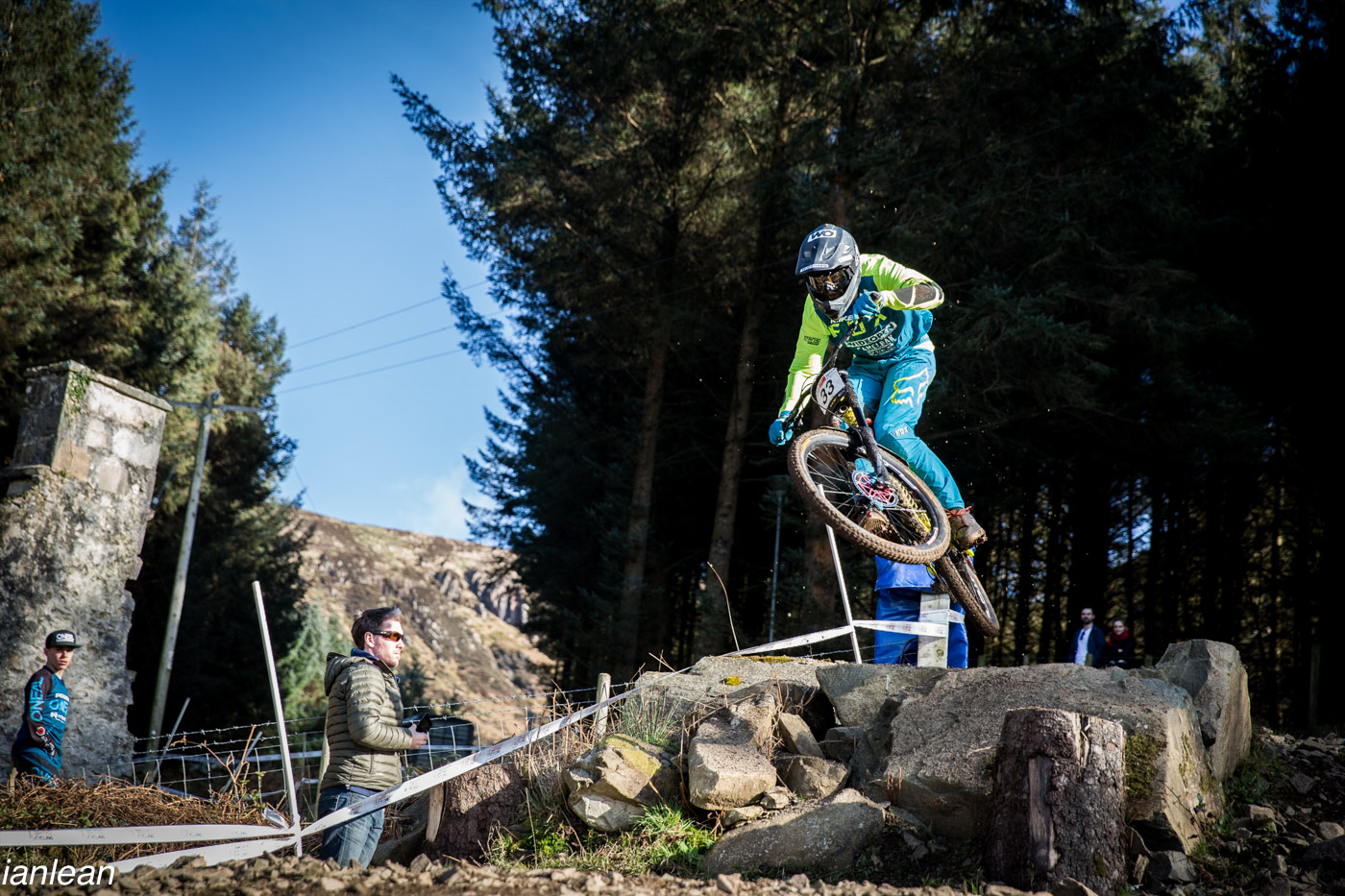 On Saturday, Nant G was dark, grim and dreary. The clouds hit the views, the wind howled and the old, abandoned mining cottages that dotted the valley gave the venue an eerie vibe.

Sunday was a totally different game. The sun blazed, the sea was calm and the sunnies were on. Here’s Team Wideopenmag’s Kye Forte enjoying a bit of sunshine during his first Elite downhill race. Since starting racing 4 years ago he he’s graduated from the Masters field and the expert field – moving into elite in his mid 30’s! 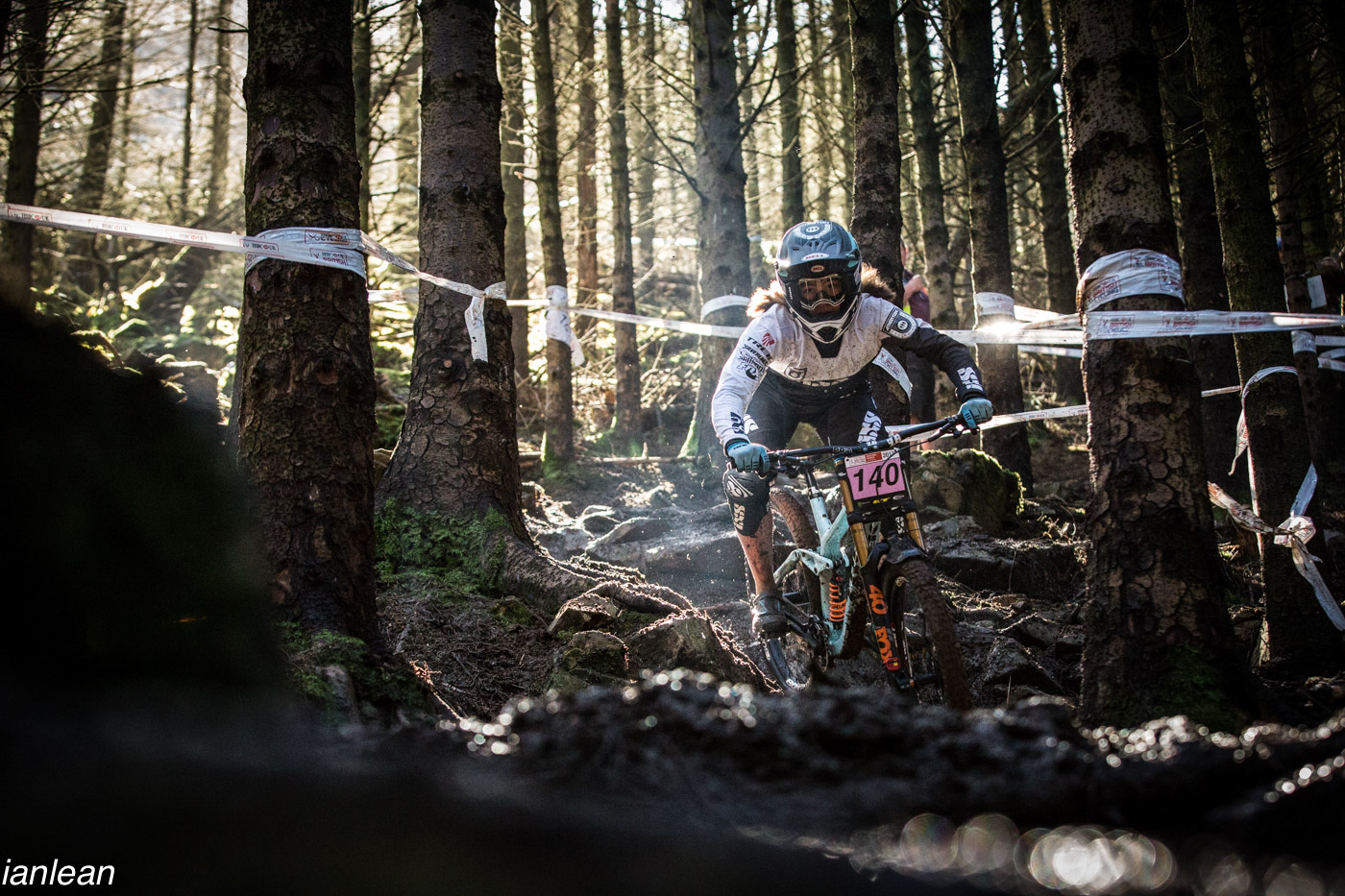 The female field at the National Downhill Series is so strong. Back in 2011 there were just 13 women on the hill. In 2017, there were almost twice that include a strong field of young guns.

A huge force in women’s racing is Rachel Atherton – she doesn’t just inspire women through her absolute dominance of the field, she also sponsors the 17-18 year old’s category and supports fast Norwegian Mille Johnset (above). Mille looked pinned all weekend, taking 2nd in her category behind Megan James. 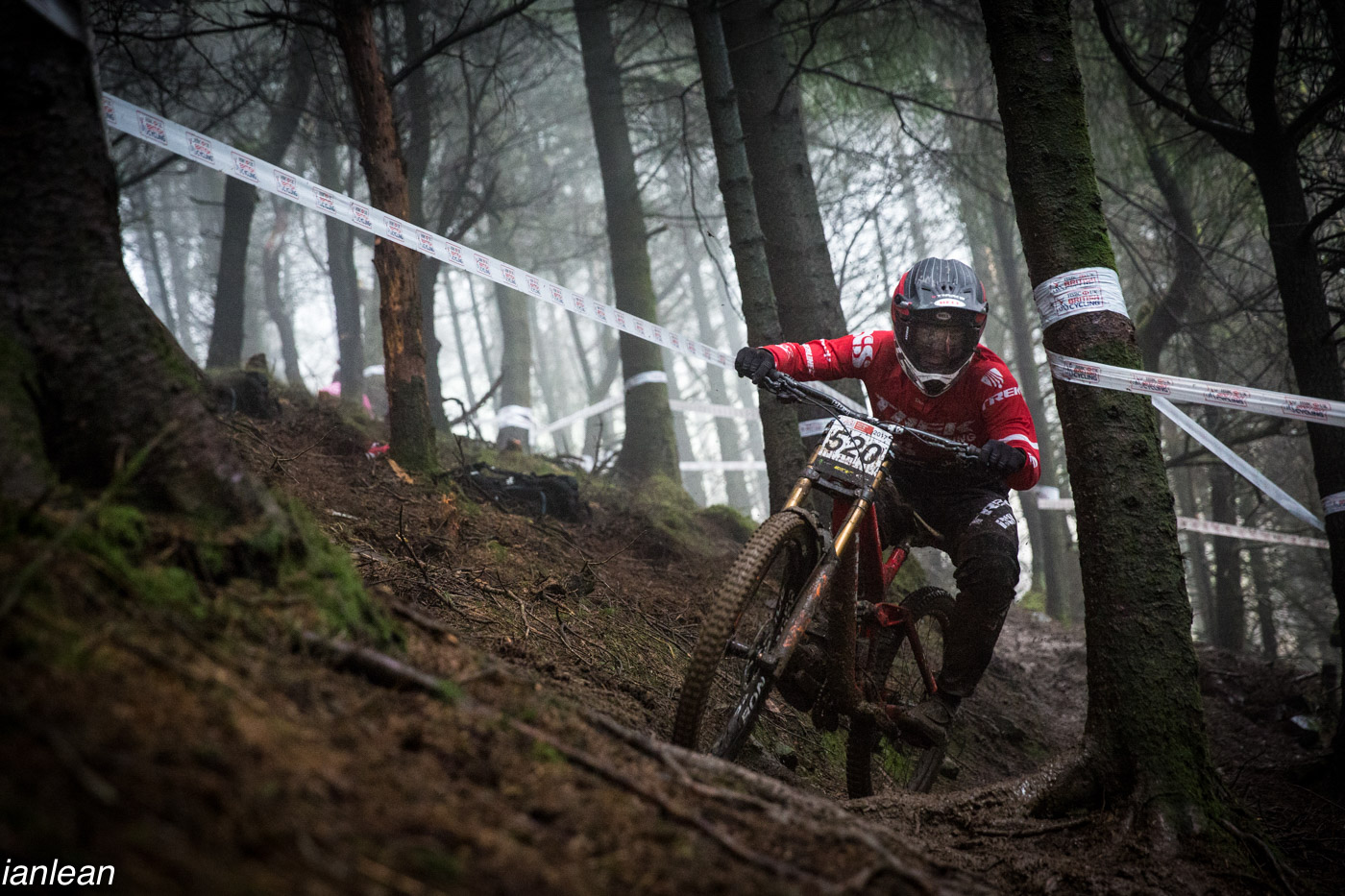 The Junior field is tough. It’s a pressure cooker for young racers that are staring down the barrel of an up coming elite career. If they go fast, win races and create a strong reputation for themselves they’ll hit their elite World Cup year running with good support behind them. If not, it’s first day at school time as a privateer for their first race in the big league.

Above – is Trek Factory Racing’s Kade Edwards – who looked fast and loose all weekend. Despite the tough conditions and deep ruts, Kade was hitting the big lines and looking strong. He took 4th in his final run as a first year junior and a now full member of the Atherton’s programme. 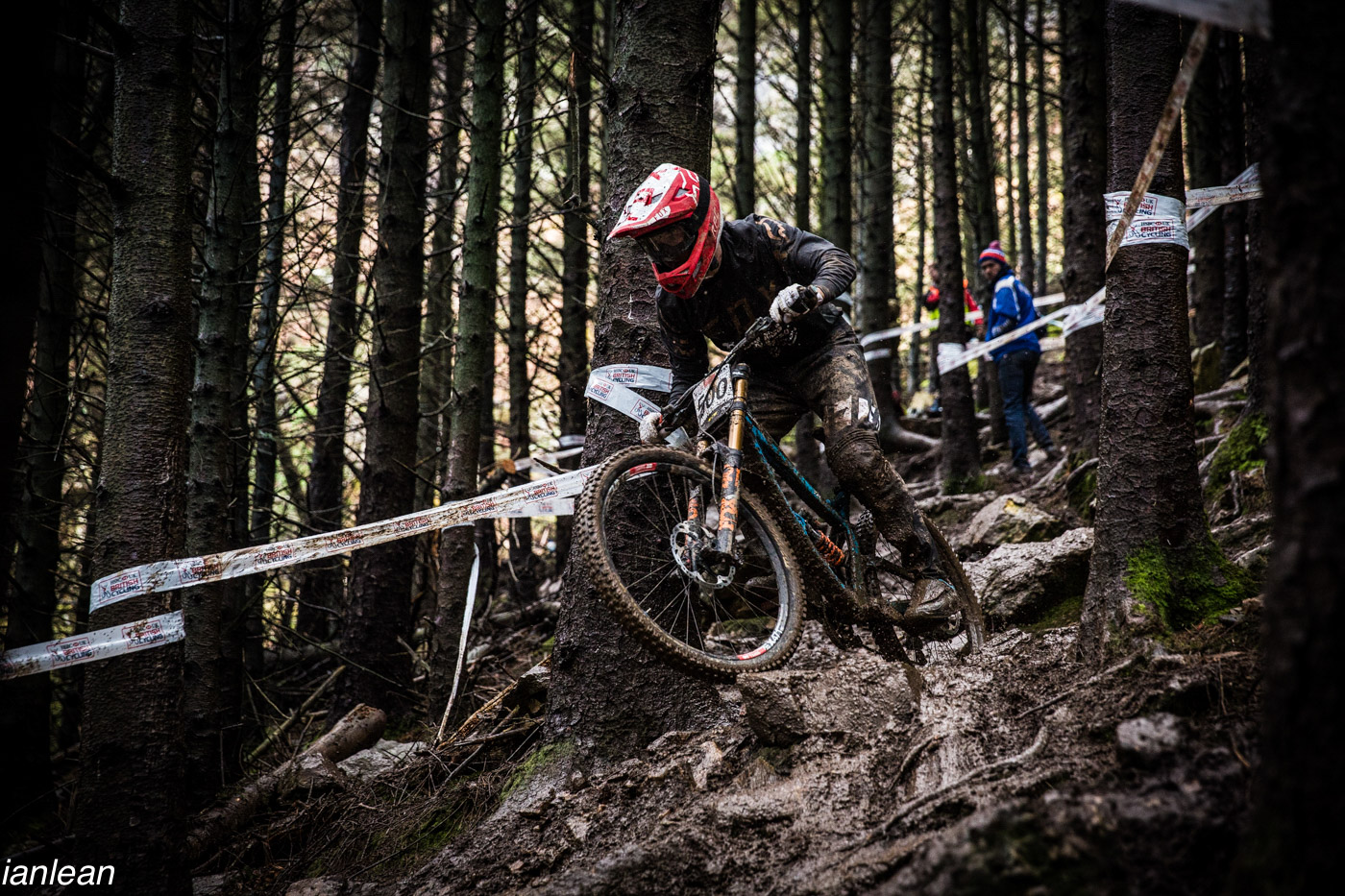 Kaos Seagrave (above) probably has the coolest name on the race scene. His battled the chaos on track (sorry, bad pun) and took 3rd. 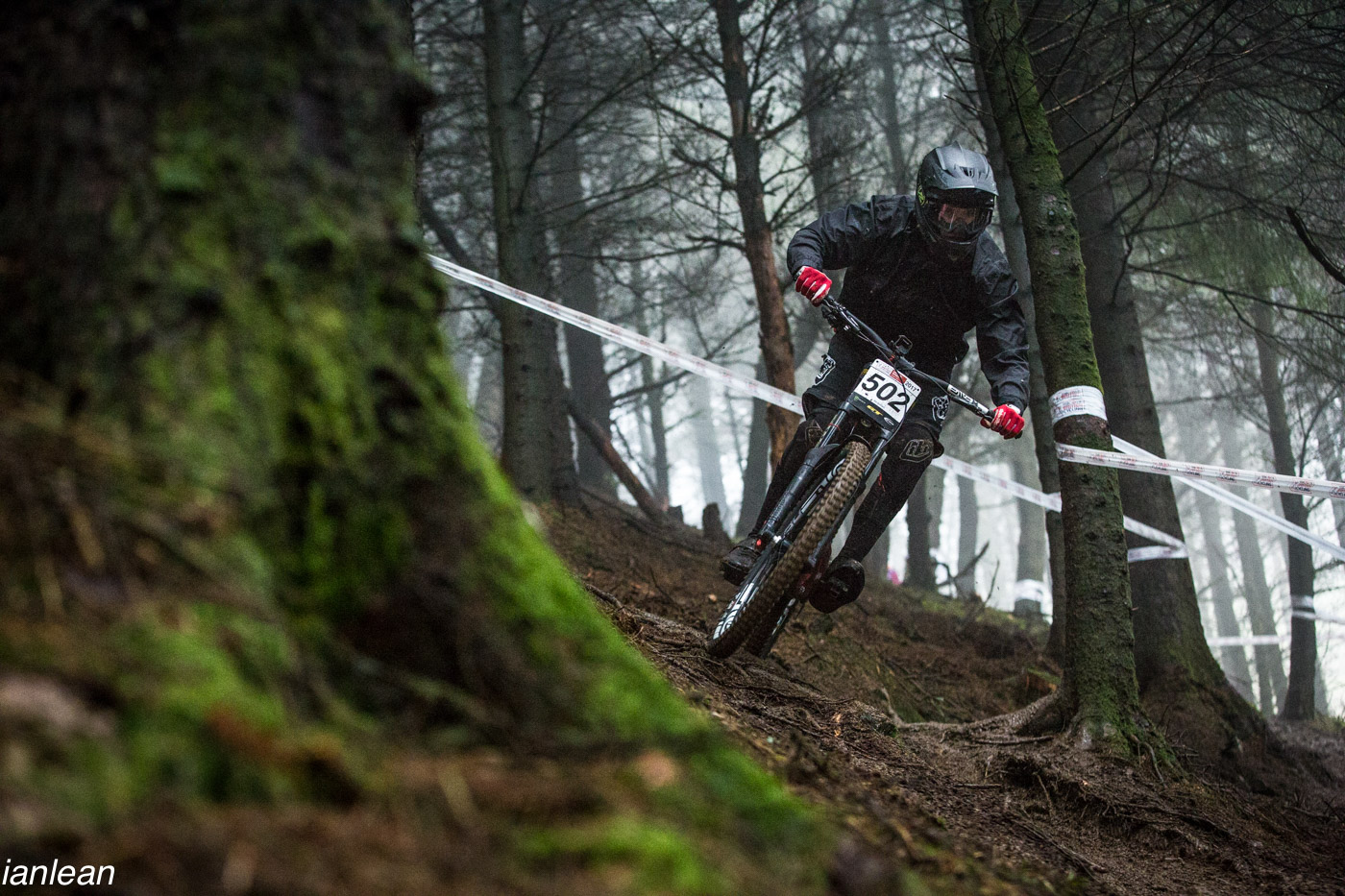 Joe Breeden (above) is one part of the new Intense Racing UK team, run by UK distributor Saddleback. It was their first ever British National and the team was out in force and looking pinned – with a good mix of young guns and old dogs.

Nant G saw a first place in Junior for Joe. With a 9th in 2016 Junior World Champs there’s good things to come. 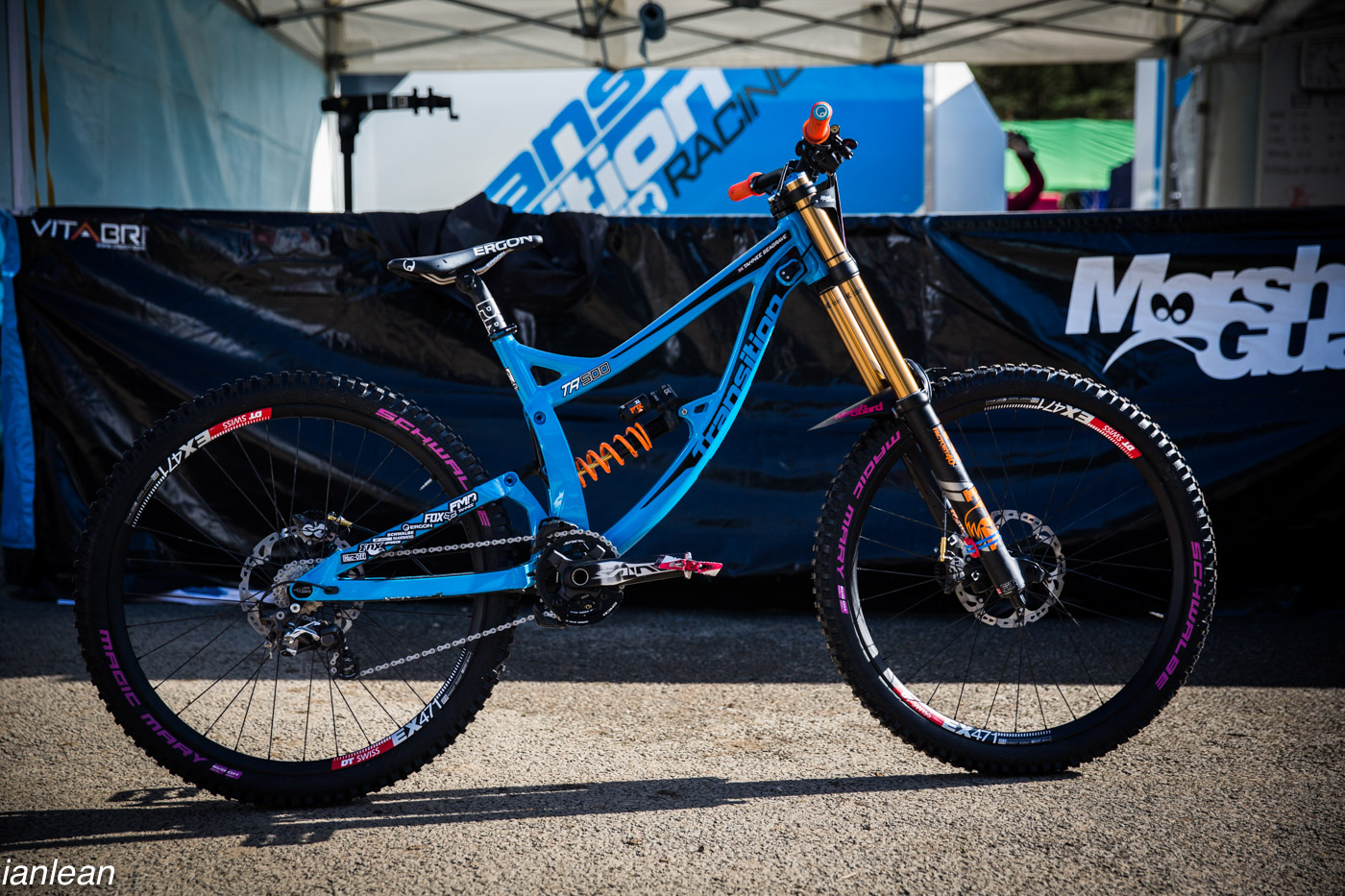 The elite women’s race was always going to be a battle between Manon Carpenter, Tahnee Seagrave and Rachel Atherton – but with 11 elite women on track there were plenty of girls pushing to get on the podium.

Tahnee Seagrave had an unlucky weekend. She worked hard in timed practice and put in an impressive 9 runs, then placed 2nd fastest in seeding with just 1 second between her and Rachel. Sadly for her, she crashed in her race run and crossed the line to applause and an 11th place.

Tahnee was spotted running prototype compound Schwalbe Magic Mary tires. The pink graphics and strip down their tread signifies that they’re something experimental! 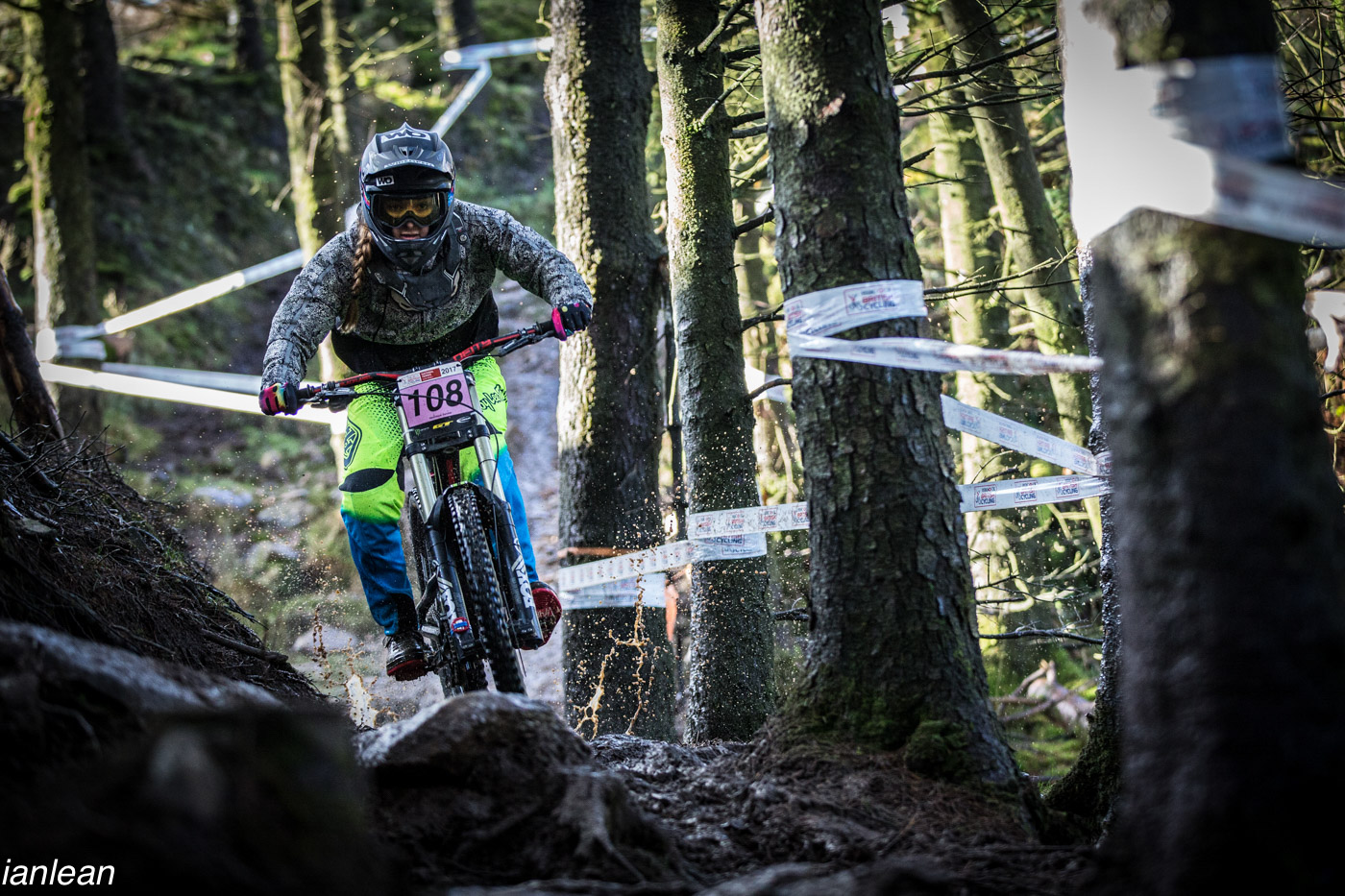 Veronique Sandler ladies and gents! Wideopen’s new presenter was out and showing that she can race with the big guns as well as create cool stories for our website. She was out punching laps with Manon on her new Intense M16 and took 4th place in seeding and 3rd in elite. Great job Vero, welcome to the family! 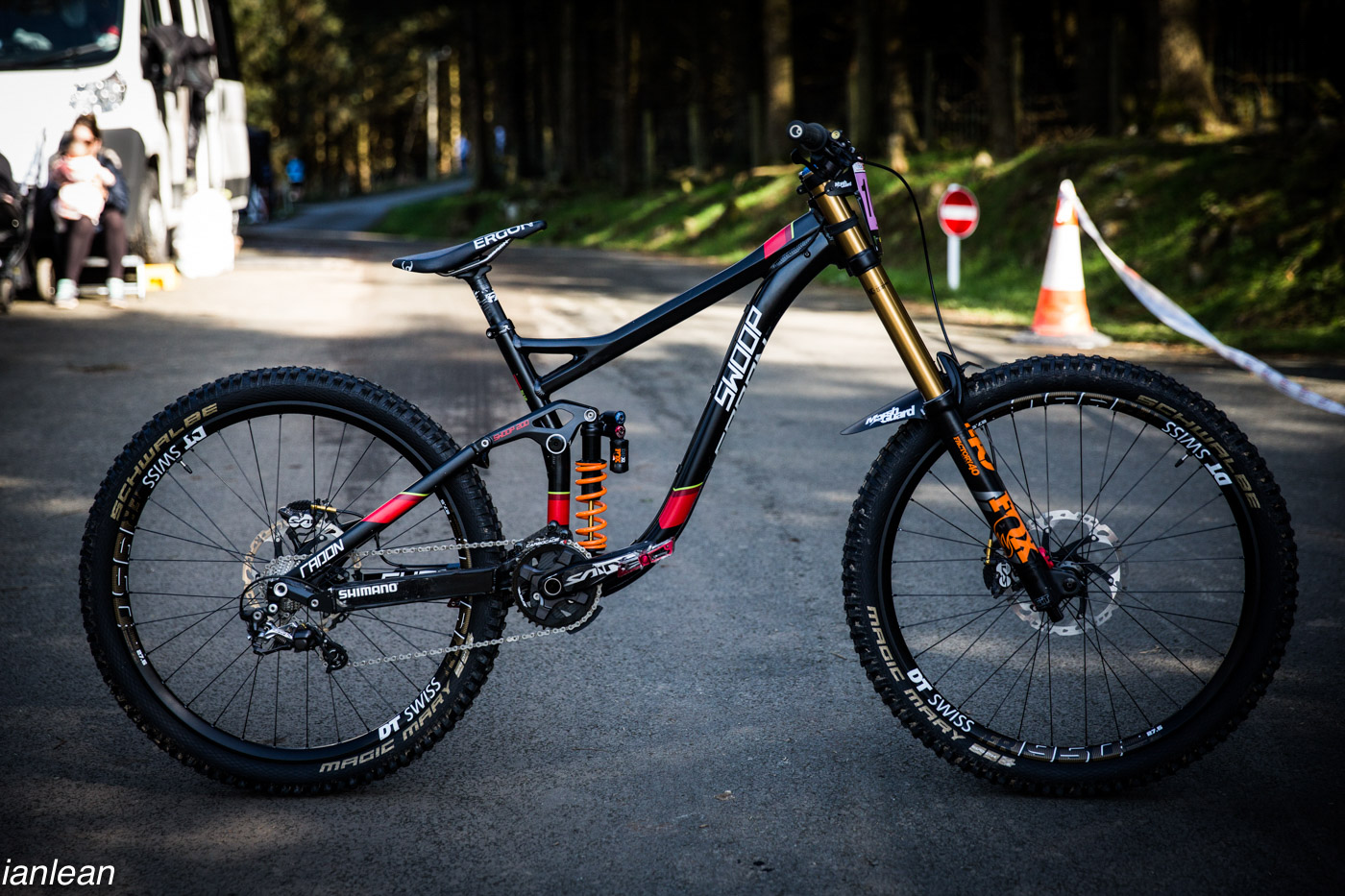 New team, new bike, new year. Manon Carpenter went fastest in practice on Saturday on her new Radon Swoop and – like always – was quietly grafting away all weekend.

It was a little strange to see her moving from a big factory set up to working out the back of her van with her mechanic. Back in 2011, Manon took the win at Nant G beating Fionn Griffiths and Jess Stone – this year  she had to settle for 2nd place. We’re hoping we’ll see her at more British races this year on her new team. 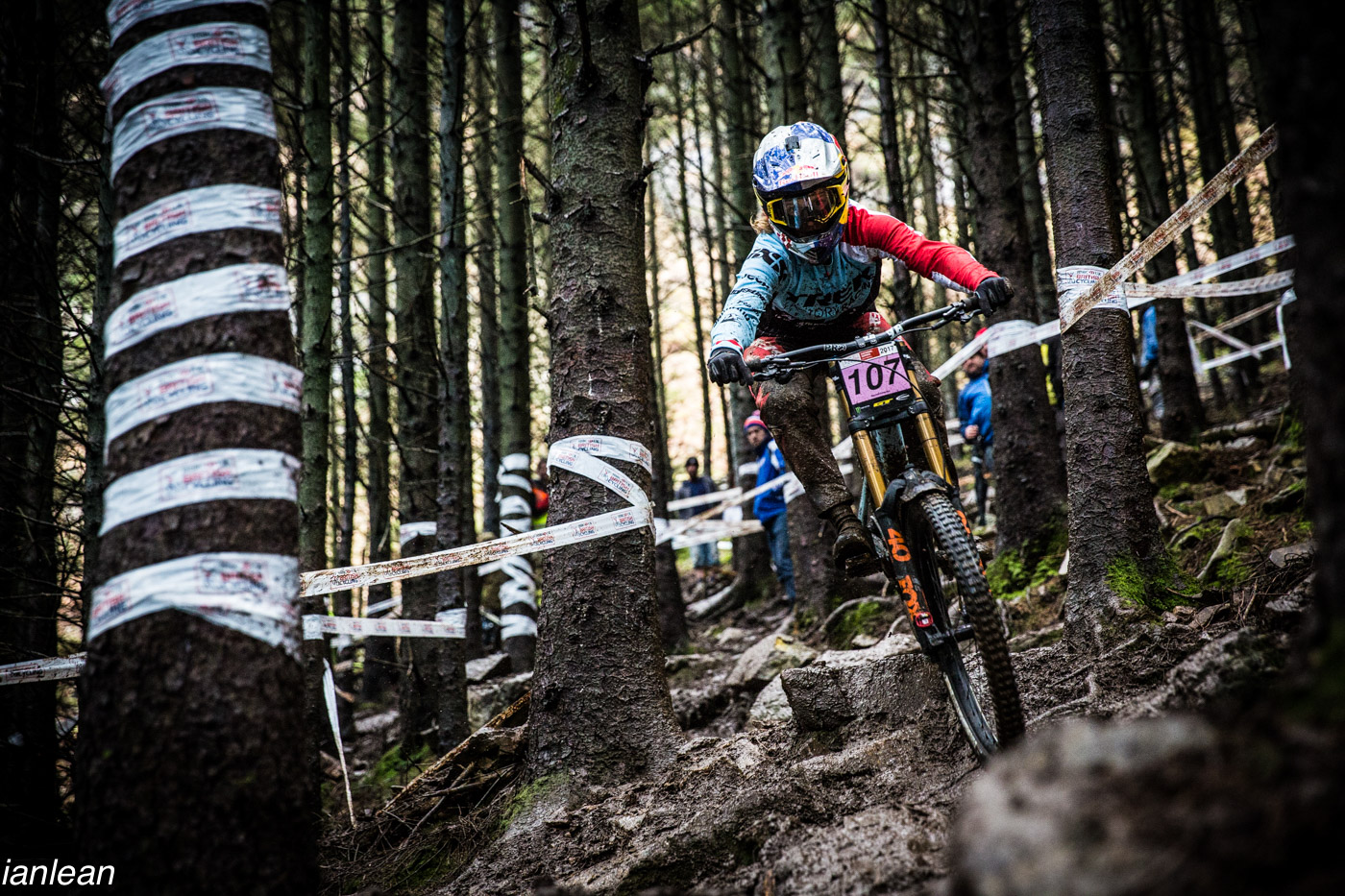 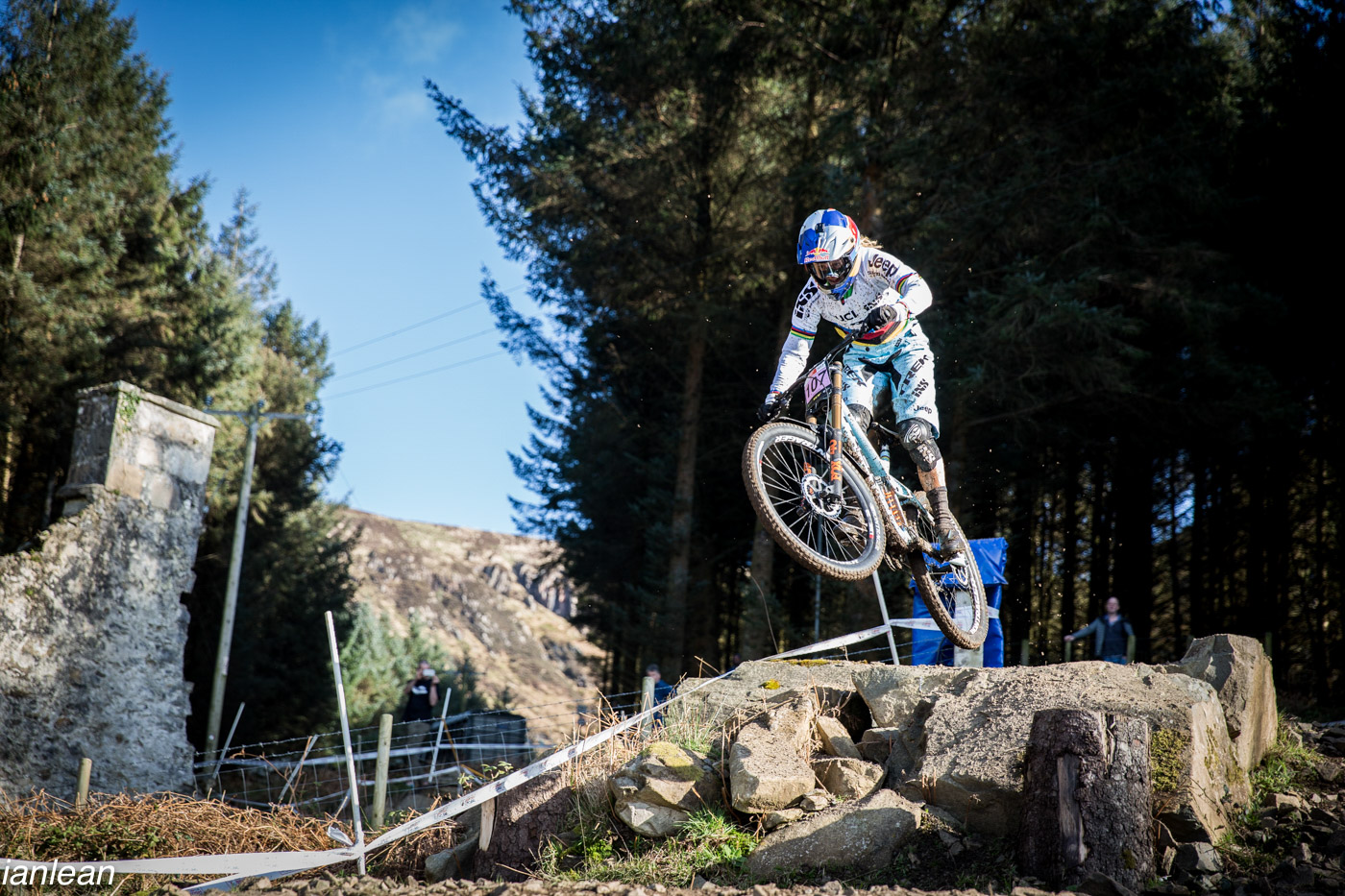 There were rumours that the Atherton family wouldn’t be racing the National Downhill Series this year, thankfully they were just rumours. It was good to see them on track all weekend with Rachel, Gee, Kade Edwards, Mille Johnset and new guy Graeme Mudd all out in force.

Rachel clearly took a chilled approach to Saturday. Where Tahnee put in a full day’s practice with 9 runs, Rachel did just 5 and stayed well clear of fastest practice time of the day. On race day she switched it right up taking a one second lead in second and then an incredible 10 second lead in her race run. Dominant.

There’s no picture of Rachel’s winning Trek Session race bike – the team are running a proto-no-photo bike that were politely asked not to snap shots of. It looked pretty similar to us but is apparently going to make some bike upgrades. That’ll be announced at Fort William World Cup we’re told. 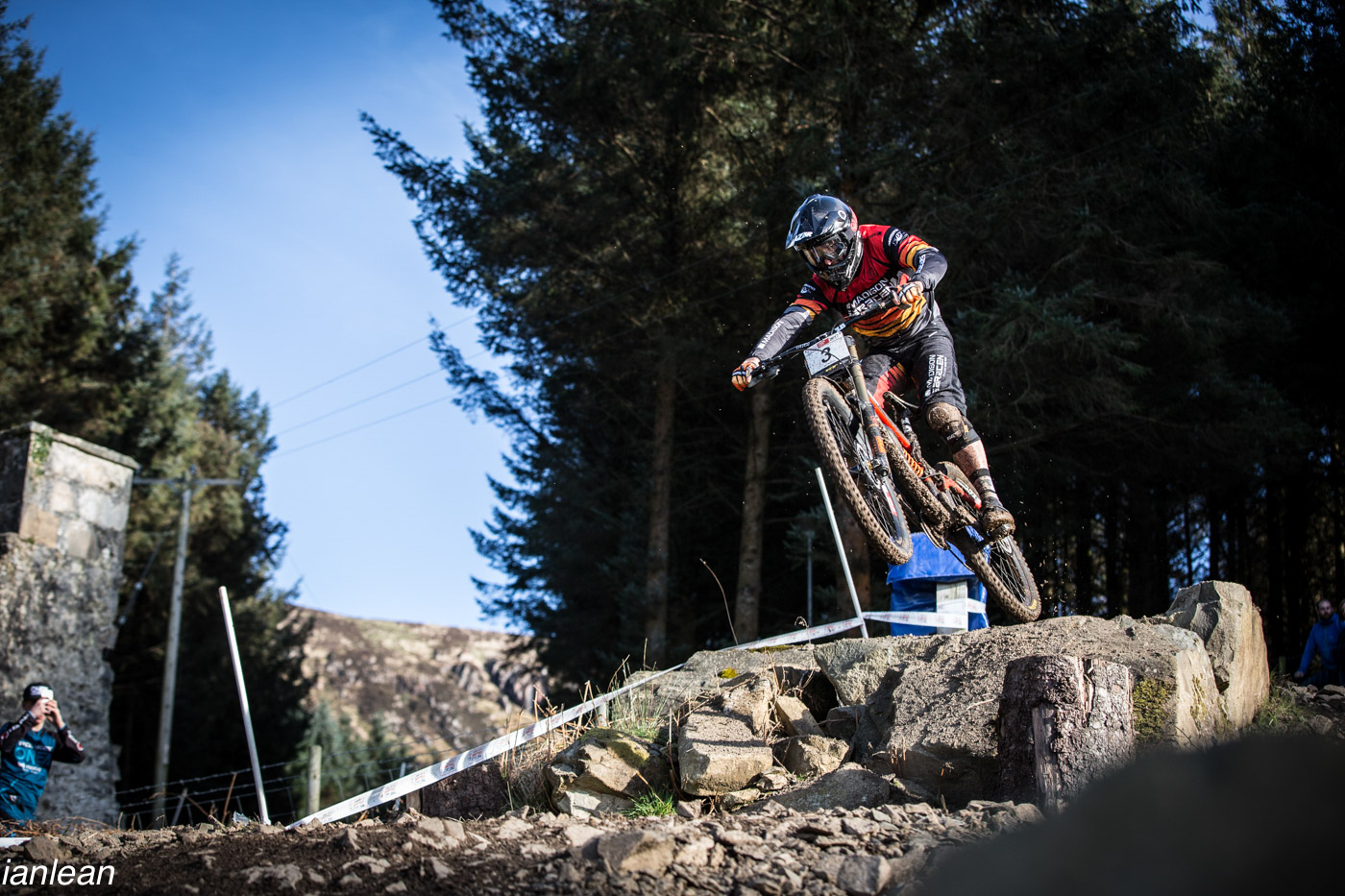 Marc Beaumont (above) won the first ever National downhill at Nant G, beating Al Bond and Steve Peat to the top spot. Six years later on a different bike and team and after a break to present GMBN he went second fastest in seeding and was fastest through the split in the tough bottom section. Unlucky for him, it wasn’t to be on race day and he crossed the line in 17th.

Mike Jones (above) deep in the rocks up top on the Chad Reed #22 plate. Mike is a dark horse. You don’t hear much of the South Wales pinner until he quietly smashes out a killer result. He’s a funny, fast and super talented rider that we’re rooting for this year at World Cup. We’re excited to hear he’ll be at the full BDS this year with team mate Elliot Heap. 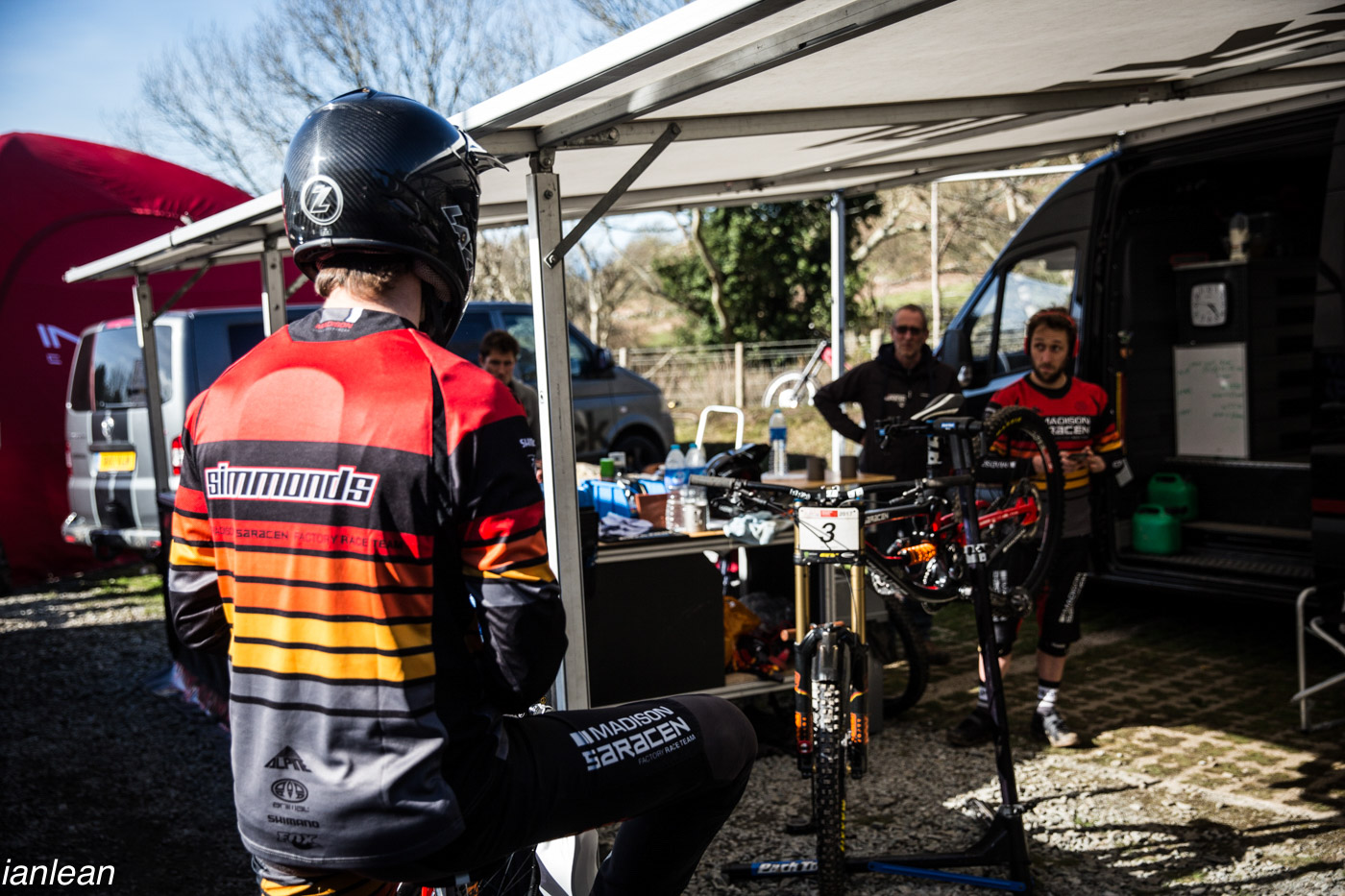 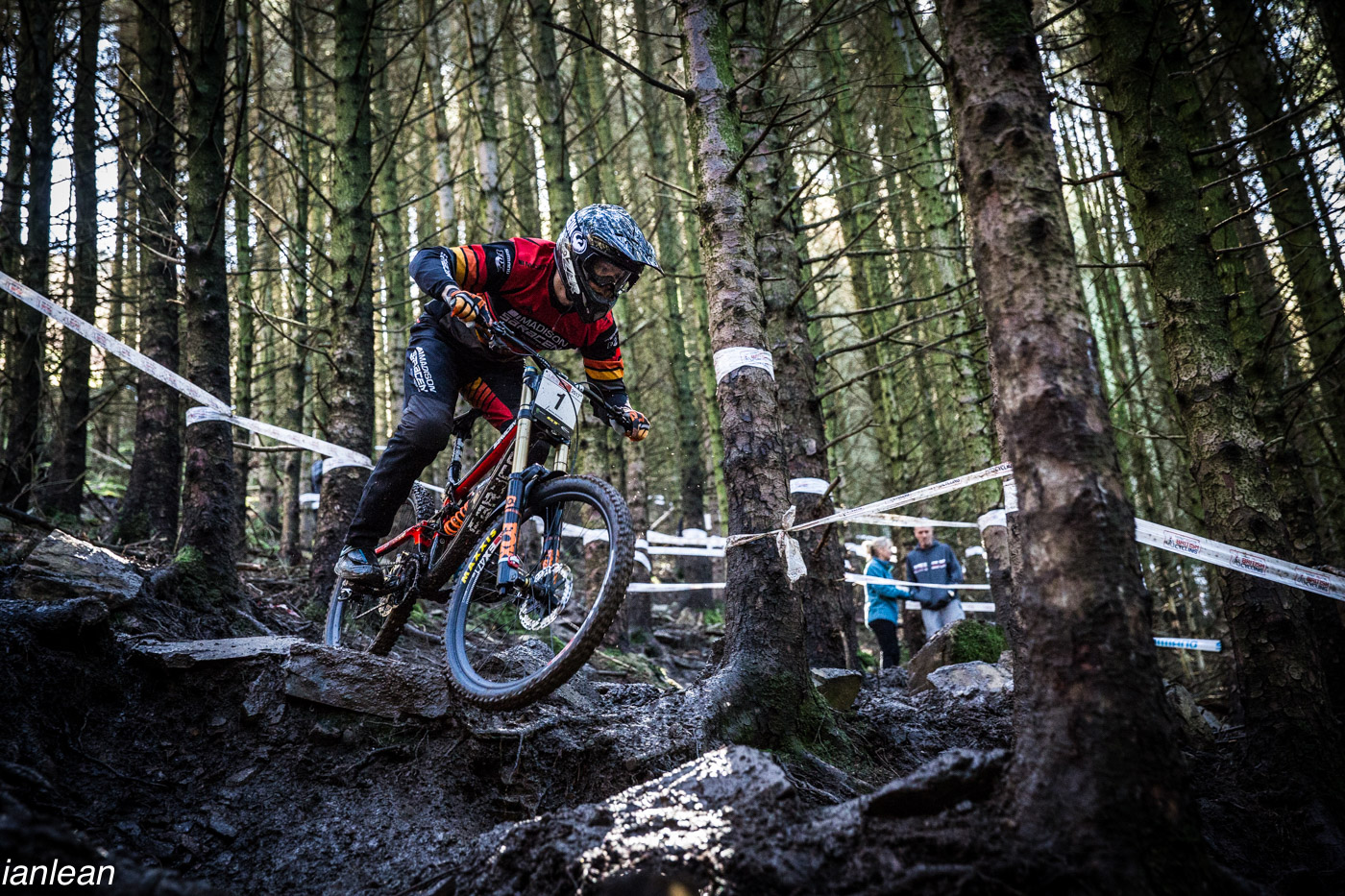 2016’s British Downhill Series saw Matt Simmonds take the overall elite male series win. He was crowned in Llangollen on a sunny September evening in North Wales. Fast forward six months and the series, Matt and the rest of us are back in North Wales battling it out again. 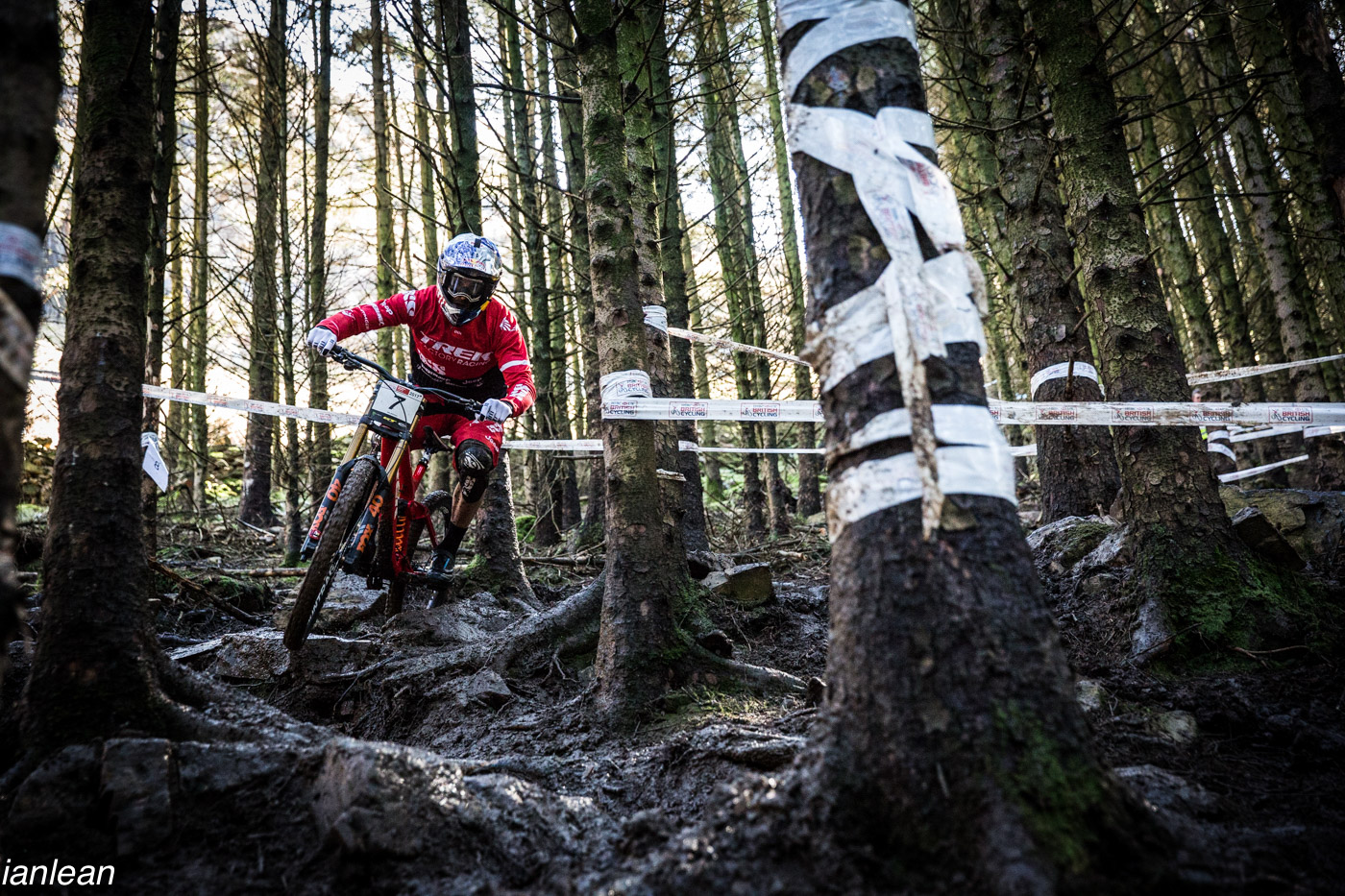 Gee Atherton, fresh back from Winter training camp, threw himself into Nant G. Gee and team hit up the pre-race uplift on Friday and then put in another 5 runs on Saturday, albeit at a fairly sedate pace. He went 3rd fastest in seeding but couldn’t quite stick it together for finals – having to settle for 2nd.

Interestingly, Gee was one of two riders that chose to flaunt the ‘no helmet cams’ rule and go on track with their GoPro stuck to their lid. He got a £100 fine for his trouble from British Cycling. Apparently we’re definitely not allowed to consider the ‘fine’ as a buy-in fee to shoot helmet cams this year.

And your winner. Would you dare bet against him? In his new Monster helmet – Mr Danny Hart. Fastest in practice, down in 5th in seeding and then two seconds up in his race run.

Danny had a bit of chat to Gee at the finish line and admitted to bottling a line in his race run and going in sketchy into one of the off-cambers. It clearly didn’t matter.

Thanks as always to the British National Series team – not least Si Paton – for an incredible weekend of racing and for propelling mountain bike racing in the UK onwards and upwards.

Sure, things don’t always go to the plan but we’re just riding bikes right? Those guys do a hell of a job of creating a national series that’s the envy of the world. We’re lucky to have them. 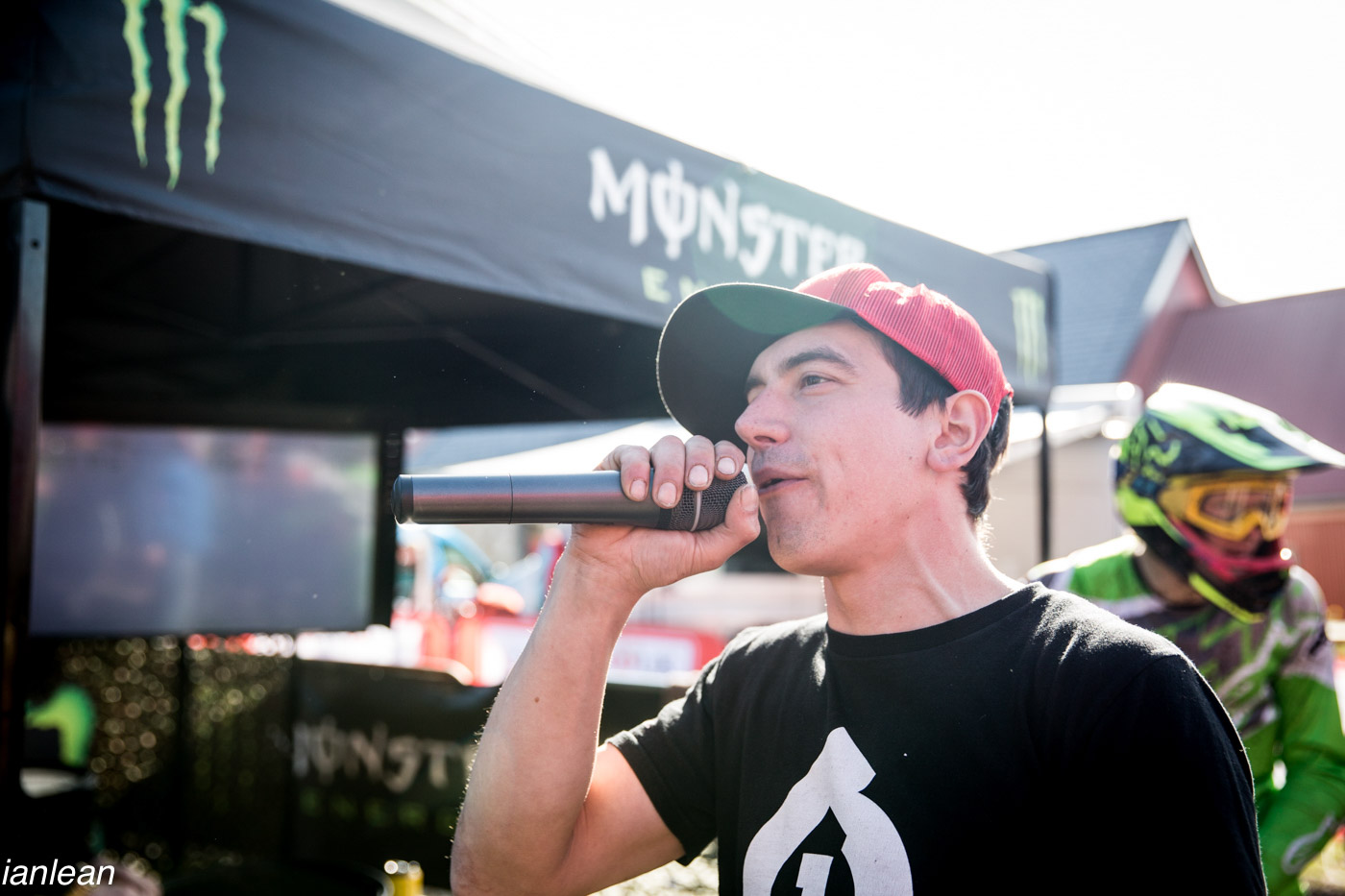 Cheers Nant G – when the sun came out and the mist cleared you were a stunning venue that most of us would never even have heard about were it not for bike racing. 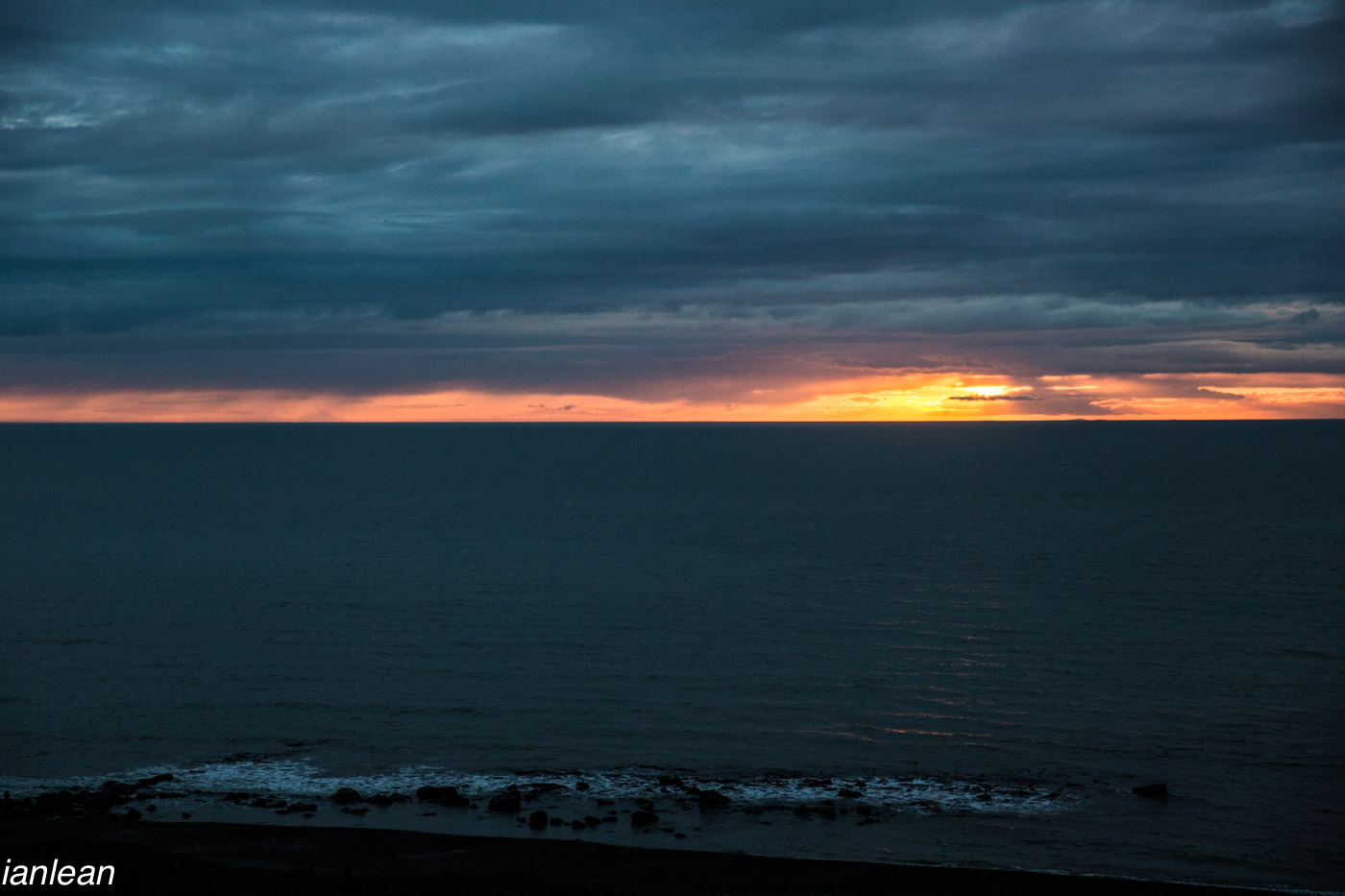 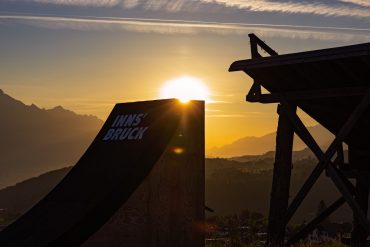 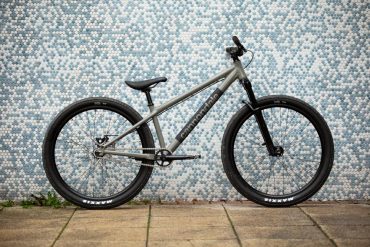 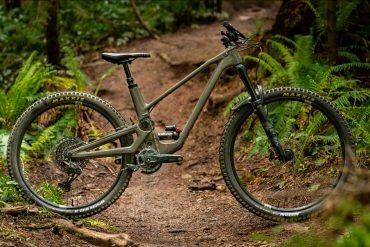 Next
GMBN Visit the Continental Factory.