And Your Fort William World Cup Winners Are…

Oh boy, the Fort William World Cup delivered with some more classic racing despite the low cloud and constant mizzle.

It was well worth the three year wait for World Cup racing to return to Fort William as the crowd roared riders down track from the get-go.

Jordan Williams took an emphatic home win on home soil by taking a full second out of Jackson Goldstone to pip the Canadian by what we believe is a whisker, a mere 0.038 of a second. These two would have gone second and third in Elite Men’s qualifying with their times today. Madness.

Remy Meier-Smith rounded out the top three, four and a half back. These three are streets ahead of the rest of the pack.

Gracey Hemstreet shrugged off a stack in qualifying yesterday to pip two flying Brits in the form of Phoebe Gale and Aimi Kenyon who had to settle for second and third respectively. Like the Junior Men, the top three Junior Women are streets ahead of the chasing pack.

Nina Hoffman would prove that her British National win and her 8th place quali with a flat yesterday was a sign of things to come as she went into the hot seat with fifteen seconds to spare. She’d keep more than three and half of them over series leader Camille Balanche to take an emphatic win in Scotland. She’d become the first German to win here.

Myriam Nicole might not be happy with third and being seven back but it was a strong run an saw off the rest of the field to finish third. Eleonora Farina is becoming a podium regular of late and slid into fourth, benefitting from a crash for Vali Holl.

Neither Mikayla Parton nor Stacey Fisher could better their quali results but they were definitely the crowd favourites this weekend.

Austin Dooley laid down the early marker and would have to wait until Aussie National Champ Connor Fearon pipped him after the American had kept the seat warm for a fair while. Greenland’s quali time was six seconds quicker though, so nobody could get too comfortable.

Dylan Levesque would go on to put three seconds into Fearon pulling the times closer to the fastest qualifying time. Many riders would get close, but no cigar.

Baptiste Pierron would be the first rider to go sub 4:42. The French National Champ went into the hotseat as the wind and rain started to strengthen.

Dakotah Norton would continue his strong form on the prototype Intense building into a heater of a run before going down like a sack of crap just before he exited the woods.

Thibaut Daprela would disregard the liquid sunshine and attack the track in his inimitable style and beat Laurie’s quali time by half a second, bumping Baptiste out of the hot seat.

Kade Edwards would bin it high on the track but got the loudest cheer for going full slopestyle on the motorway.

Few riders are getting close to Daprela’s time. Either the track is slowing or the visibility is dropping…

Amaury Pierron would the next rider to chase down the hot seat. He’d smash the motorway to go green at the last split, much to the delight of the crowd. Half a second on his team mate. Three to go.

Laurie Greenland goes up by 1.3 at split two and the crowd erupts. He’s down at split three. It’s all on the motorway. He’s coming back. The noise is unreal. Laurie into third…

Pierron takes it. Three from there at Fort William.

Full results can be found on the UCI website here. 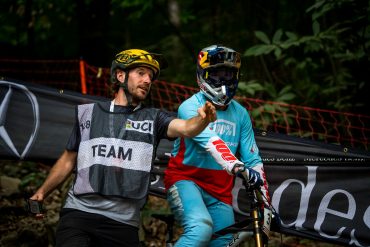 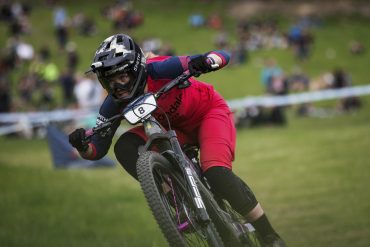 Top Tips to Fuel Your Ride and Race.

Next
Fort William To Host the 2023 UCI Downhill World Championships.