Another gem that we uncovered amongst the eBikes and schnitzel of Eurobike was the new Pipedream Cycles Moxie prototype – a hardtail that offers some proper modern, aggro geometry.

We met Pipedream at the start of this year with our interview, video and review of the Pipedream Sirius 4G. We liked it – it was a bike for all day adventures and big miles, but one that still could get you out of trouble when the terrain gets rough. It wasn’t really an enduro  or downhill racers’ hardtail, but that’s cool.

The new Pipedream Moxie prototype turns the aggro angles up a few notches and creates a longer, lower and slacker bike for gnarlier, more technical terrain.

The bike isn’t available yet but Pipedream are asking for people to get in touch if they want one here. If they get enough interest they’ll put the order through sooner, rather than later. 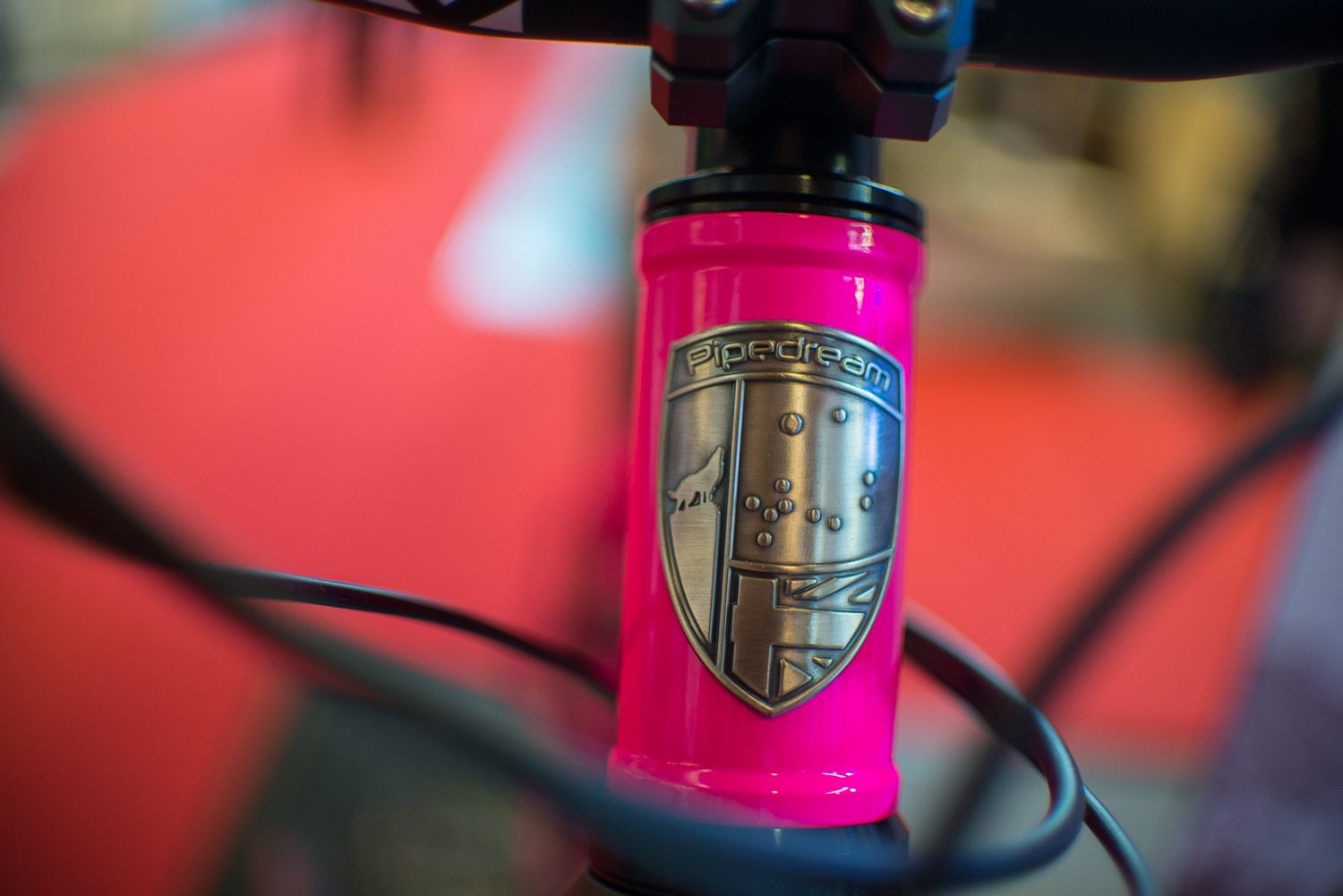 The bike was designed because Pipedream owner Alan wanted something that would give him a helping hand when the terrain gets more scary. He remembers old, steep, scary bikes and remembers time spent off the bike thanks to injuries. He told us that he’d rather spend time on the bike than on the ground and wants to make bikes that offer stability, control and ‘snap’ back into shape when you make a mistake rather than spitting you over the bars. No complaints here.

The Pipedream’s head angle isn’t crazy – but is a comfortable, modern, aggressive 65.5d with a 160mm fork. Alan didn’t want to go too slack out of the box but can supply Works Components angle adjust headset cups to give an extra 0.5 to 2d extra slackness as rider’s see fit.

The frame is made out of custom butted, heat treated 4130 chromo with a full custom down tube and top tube that Pipedream reckon is of a quality to rival anything else out there. 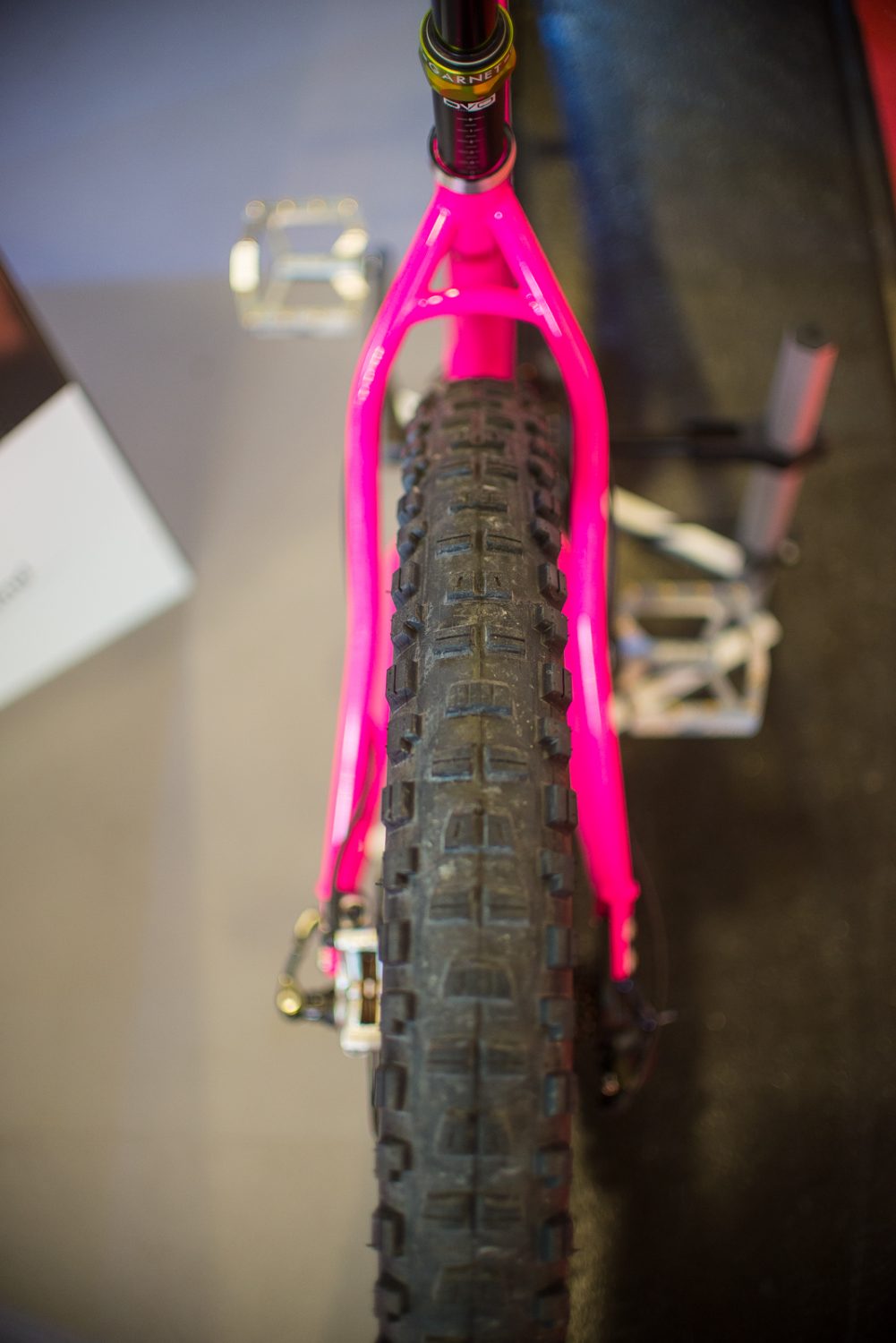 Alan is keen to point out that despite the large numbers the bike has been designed not to feel unwieldy. He has designed it with a 76.5d seat tube angle that, we’re told, is the key to tieing the bike together and giving it a roomy but comfortable feel. We’re looking forward to giving it a shot when the demo bike is available

The bike you see here arrived just in time for Eurobike and is a prototype. The bright pink colour was meant as a show stopper, rather than a finished option … Alan is keen to hear from the riders what colours they’d like!

Alan doesn’t have an exact idea of when production bikes will be available … but is hoping to have them on his website and on sale by the end of 2017. Pricing is still to be confirmed also.

Again, if you want one, get in touch here and let him know. If he gets enough interest he’ll punch the button at the factory.

You can read more about Pipedream here on Wideopen. 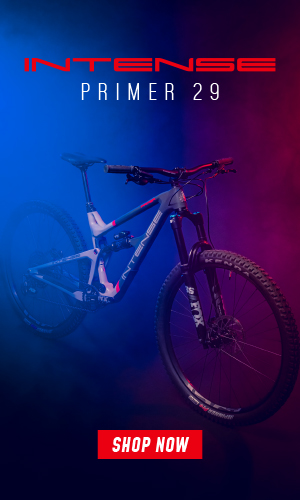 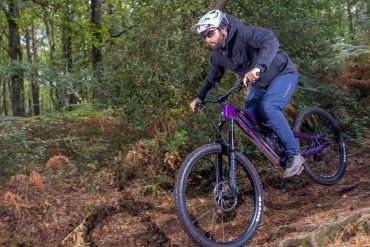 The New Merida OneSixty | Everything You Need to Know.

Juice Lubes’ Home to Roost Catches Up with Joel Anderson.